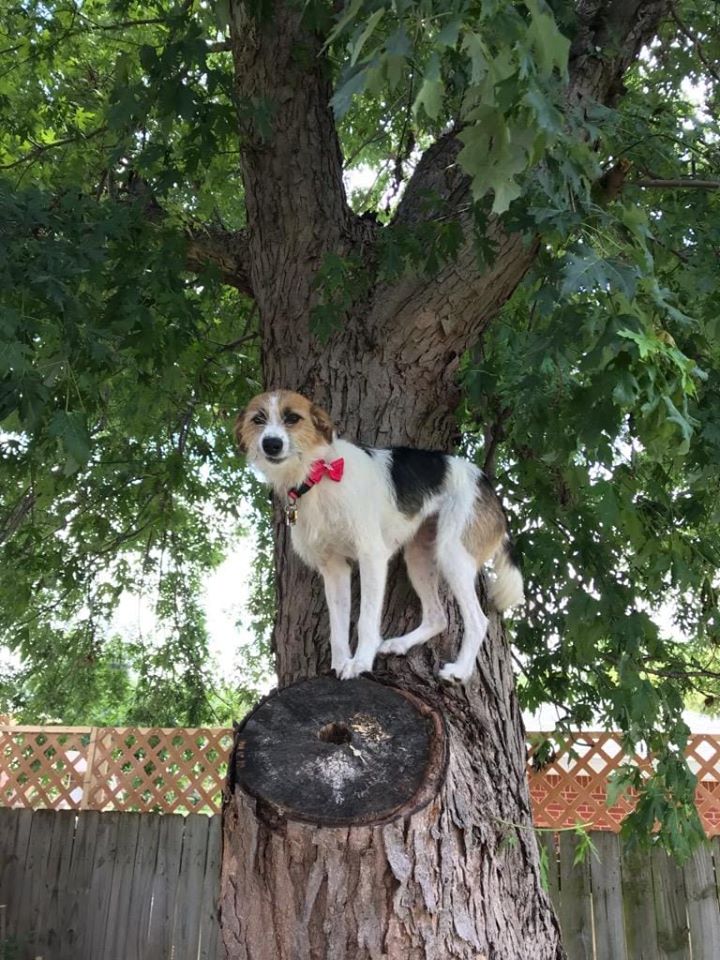 (feel good story, long but worth it!)

Once upon a time we were called to a case about a momma dog who gave birth at the entrance of a cave. One of the babies had fallen down into the cave. The pup was down there already for over two days. no police, no firefighters could help.

The baby was saved. All the babies were successfully adopted.

This story is about the momma dog and her foster mom, Lacey.

The momma dog was extremely timid and suspicious of humans. Imagine, we confiscated her babies in the morning and then in the evening, with two babies as bait, we trapped the mom in a travel box. We needed her in order to insure the proper development of these newborns.

I kept her and the babies in my home, in my basement, for the first couple of weeks. She would disappear into smoke when I would open the door to feed and clean. She would hide in the deepest, darkest corner of my basement. She wanted zero to do with me. She wanted zero to do with humans. Yes, in the past she spent her time at the busy local supermarket in order to be fed but cautiously stayed meters away from anyone.

At my home she fed her pups for three weeks and then began to reject them. She was very young and very nervous and this behavior of disowning the pups was not rare so I separated them. The mom was brought to the shelter.

At the shelter the mom was severely depressed. She would not lift her head from the ground. We were all quite concerned with her. That was when Lacey appeared to volunteer. First day. Smiles from ear to ear.

Lacey did not manage to see the whole shelter when her eyes fell upon the mom. Immediately troubled, she rushed over to the pen to sit with her. And that is how their story began.

Lacey left the shelter with the mom, equipped with a cage and necessities. Her expectations were to help this animal psychologically. To gain the animal’s trust and to connect with her. With my experience I knew this was going to be a gigantic task but Lacey exuded goodness and certainty. She was knowledgeable and I knew the dog was in good hands.

The first signs of “special behaviors” came when Lacey was outside of the home for some minutes, speaking to a neighbor. All doors and windows of the house were closed with the mom dog inside. Suddenly, she saw the mom roaming outside of the house. The mom did not run away but was nonchalantly sniffing about. Sybil, as she was now named, destroyed the metal crate I had given Lacey. She crated Sybil when she would leave the house, for the safety of the animal. Sybil managed to bend the bars and get out.

How she got out of the house Lacey still does not know.

Sybil had broken her crate so Lacey figured she would take her with, in the car, to the supermarket. She would run inside and be no longer than 15 minutes. In 15 minutes Sybil had destroyed the entire inside of a brand new Jeep. I could not begin to imagine the damages until the photos came to me in messenger.

She ate seatbelts, roofs, dashboards, wiring, seats, carpets, door handles, window controls. I had never in my entire life see such a thing.

I was shocked, horrified, embarrassed. I immediately told Lacey I was coming to get her. Lacey told me to wait till the morning. THOUSANDS OF DOLLARS WORTH OF DAMAGES.

The next morning I called Lacey to arrange to pick up Sybil. After much consideration and discussion with family Lacey decided that she did not want to give up on Sybil. Lacey explained that this behavior was extreme and that this animal needed to be healed from serious trauma. She would keep her for further fostering/therapy.

In the days to come, the accidents were fewer (she did chew the couch through a wooden crate), the trust grew greater, the need for crates disappeared.

But soon it was time for Lacey to leave the island. I was heartbroken and panicked. What would I do with Sybil? Who would I give her to? She could in no way come back to the shelter.

That was when Lacey, having invested more than 100% of herself, asked to rehome Sybil to family.

Sybil left with Lacey to the US. Lacey’s mom adopted Sybil. Sybil is a happy, healthy little girl who loves life.

We later found out that Sybil had gunshot pellets in her little body. Someone had shot her in the past.

But that was just the past, a long ago, far away memory.

Thank you Lacey, you are an exceptionally special human being!

Last but not least here is one of her pups: